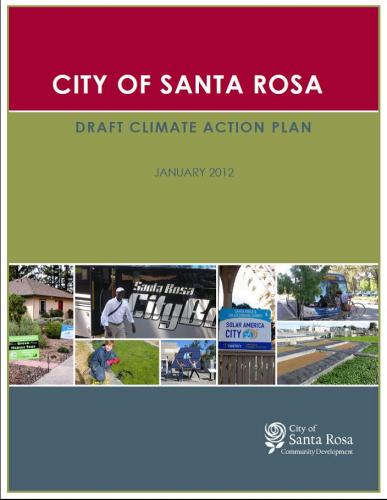 The City of Santa Rosa approved its Climate Action Plan (CAP) on June 5, 2012.  The City took a comprehensive approach in reducing GHG emissions and included a number of measures such as CECO/RECO-type policies, cool roofing and paving requirements, and employer transportation demand management programs.  In addition, the City placed an important emphasis on monitoring and implementation, which is critical to ensure that the CAP will achieve its goal over time.  The CAP’s Implementation Section states, “In the event that GHG reductions do not occur as expected, the City will be able to modify and add further policies to the CAP to ensure the City meets its local reduction target”.

Going to City Council with your CAP?  Don’t reinvent the wheel!  Borrow the City of Santa Rosa’s Agenda Packet for our own CAP adoption.

The City of Mountain View is in the process of adopting it’s Greenhouse Gas Reduction Program (GGRP), which was drafted and intended to be adopted in conjunction with the City’s 2030 General Plan update.  Mountain View’s GGRP sets forth strategies requiring future development projects to comply with prescribed mitigation measures which will help the City move toward a lower-carbon future, as well as enable development streamlining opportunities in the future.

The City of Walnut Creek approved its first Climate Action Plan (CAP) on April 17, 2012.  The CAP outlines the City’s overall strategies for reducing greenhouse gas emissions in response to state regulations to address climate change.  The CAP contains goals, measures and actions that provide a road map to achieving the City’s greenhouse gas reduction target of 15% by 2020.