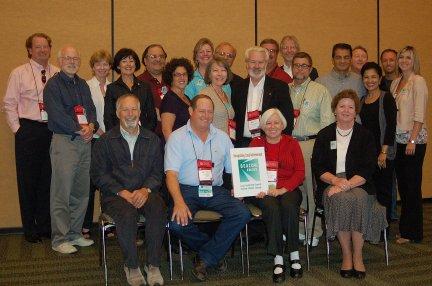 Over thirty city officials attended a special Beacon Award program meeting at the League of California Cities Annual Conference in San Francisco in September. The local officials gathered to share information about their agencies’ best practice activities to reduce greenhouse gas emissions, save energy and promote sustainability as part of their participation in the Beacon Award: Local Leadership toward Solving Climate Change recognition program.

The highlight of the meeting was special recognition of eleven cities for their interim accomplishments while working toward one of the three Beacon Award levels. The eleven cities recognized for achievements in meeting one or more of the Beacon Award’s best practices, energy efficiency or greenhouse gas reduction requirements are:

Back
This item appears in:
This general has been archived and may contain content that is out of date.
General October 4, 2011