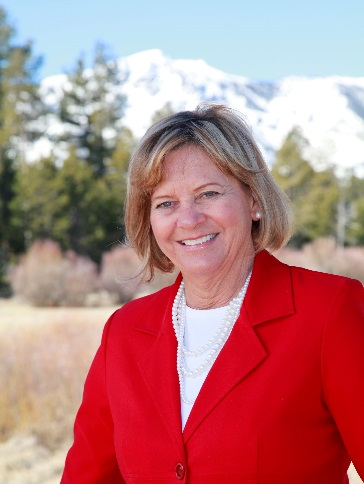 Sue is a 4th generation Californian, being born and raised in Salinas, California. She has been married to her husband Bob for over 30 years and together they raised two daughters while living in the Meyers area of Lake Tahoe.. Sue received a Bachelor’s degree from the University of Nevada, Reno, with an emphasis in finance and marketing. She founded a business in wedding coordination and performed over a half dozen weddings as an ordained minister.

Sue was elected as the District V County Supervisor in the November 2014 and is currently serving her second term in that office. She currently serves on various boards and commissions including the Tahoe Regional Planning Agency, California Tahoe Conservancy, Tahoe Transportation District, First Five of El Dorado County, the South Lake Tahoe Basin Waste JPA, and the South Tahoe Recreation JPA, Sue was recently honored in becoming the State Assembly District 5’s Woman of the Year.