Welcome Back and Congratulations Terry! 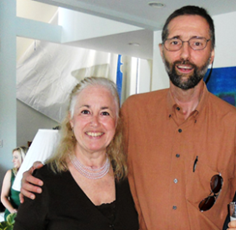 The Institute for Local Government is thrilled to announce that Terry Amsler will be rejoining the team on a part-time, telecommuting basis.

Terry Amsler was hired as the first director of the Institute for Local Government’s Public Engagement Program in 2005.  He returns to work after healing from injuries suffered when he and his fiancé, Lisa Blomgren Bingham, were struck by a bus when crossing a London street in early February of this year.

More great news: Terry and Lisa got married this past weekend!   Lisa is a professor with the School of Public and Environmental Affairs at Indiana University in Bloomington.  Terry is relocating to Indiana (hence the “telecommuting basis” part of his return). All of us at ILG are so happy for Terry and Lisa.

As of October 2nd, Terry will be reachable at his Institute email: tamsler@ca-ilg.org.