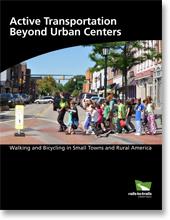 Active Transportation Beyond Urban Centers: Walking & Bicycling in Small Towns and Rural America, produced by Rails-to-Trails Conservancy (RTC) with support from SRAM and Bikes Belong, reveals the surprising prevalence of walking and bicycling in rural communities across the country.

By recognizing the key distinctions between categories of rural and urban communities, Beyond Urban Centers presents a more complete picture of how Americans move every day.  Some key findings include: