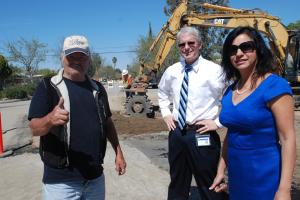 The community of Enchanted Heights straddles the western boundary of the City of Perris with half of its 446 residences within Perris and half in Riverside County. For many years, this community was plagued with failing septic tanks due to an increase in population which was not envisioned when the neighborhood was developed in the 1970s. Compounding the problem was the shallow bedrock underlying the area that prevented the systems from working properly Before a new sewer system could be built, homeowners needed to sign a right-of-entry form to allow city officials to come into their homes and disconnect old septic systems.This necessary step created a significant public engagement challenge – and opportunity – for the city as many of the immigrant families in Enchanted Heights were unfamiliar with local government processes and agencies, and some did not speak English. The city responded with a one-on-one outreach effort that secured the needed signatures and the support of residents.