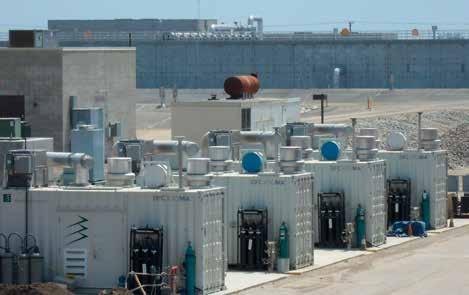 The City of Tulare has been able to reduce its electricity bills by more than $1 million a year, after installing fuel cells, at its wastewater treatment plant that help treat the water in a more cost-effective, environmentally-friendly way. The city currently has four fuel cells11 that run on biogas produced at the wastewater treatment plant. The system generates 1.2 megawatts of electricity, or 45 percent of the plant’s needs.

The fuel cell project enabled the plant to use the biogas, a by-product of the wastewater treatment process, rather than flare it off as is traditionally done. Tulare now uses biogas in its fuel cells to generate heat and electricity, with natural gas available as a back-up fuel.
The project was completed in two phases. In 2007, the city installed three fuel cells. The $7 million cost was offset by a $4.05 million rebate from Southern California Edison as part of California’s Self-Generation Incentive Program.

A fourth cell was purchased in 2011, bringing the total cost to $9.39 million, with an additional $900,000 incentive payment. Tulare estimates that the systems save the city about $3,500 a day in avoided electricity costs.

Considering operations and maintenance costs, electricity savings and
other factors, Tulare estimates the project will pay for itself in about five years and then generate future savings.