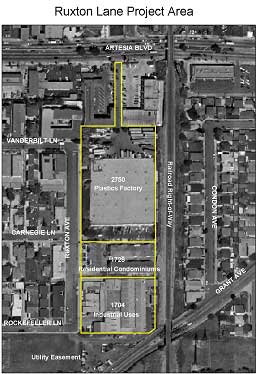 A 5-acre tract previously developed with industrial uses in North Redondo Beach is being transformed with the approval of three residential housing projects. The residential projects consist of 192 senior condominiums and 45 residential condominiums. Of these 237 residential units, 43 provide much-needed moderate- and low-income housing. Some project amenities include private and public gardens and enclosed private garages. The units are within walking distance of many commercial services, and the City is currently considering the improvement of a pedestrian pathway on city-owned property that would connect to adjoining neighborhoods.

The block was originally developed in the 1940s with various uses including auto body repair, glass manufacturing, warehousing, and a plastics factory. As the number of residential units surrounding the site increased, the incompatibility of the industrial and residential uses became more evident. Some of the major code enforcement issues in the area were the operation of illegal businesses, unpermitted building additions, illegal use of an adjacent utility right of way, and noise. In addition, the industrial uses required heavy truck traffic and the deteriorating buildings became a visual blight.

Paving the way for these residential units, the city designated the Ruxton Lane industrial area as a Targeted Revitalization Site in 1992 during a comprehensive update to the land-use element of its General Plan. The designation was given because the used industrial land was incompatible with the adjacent residential neighborhoods. The zoning was changed from Light Industrial to Medium Density Multi-Family Residential with a density of 23 dwelling units per acre.

The general plan promoted the revitalization and more effective use of properties. The specific objective for the Ruxton Lane block was to provide for the revitalization and reuse of the industrial area for residential development. The general plan policies for the site specifically mentioned the type of residential development permitted and encouraged in the area, including density, height, and design standards. The general plan included incentives for increased density and height bonuses for developments that include low- and moderate-income housing, with priority given to seniors.

The first residential project, an 18-unit condominium development located at 1728 Ruxton Lane, was approved in 1998. The developer helped clean up the neighborhood by painting the industrial buildings to the south and encouraged and helped clean up the old plastics factory to the north. Additionally, the developer purchased a rundown rental unit across the street and replaced it with a new 3-unit condominium development. In 2004, a 192-unit senior condominium complex was approved at the site of the old plastics factory. The senior condominium units approved for the site used density bonuses provided in a senior housing ordinance adopted in 2004. In early 2005, the remaining plot at 1704 Ruxton Lane was approved for 27 condominiums, thus completing the transformation of the Ruxton Lane project area.