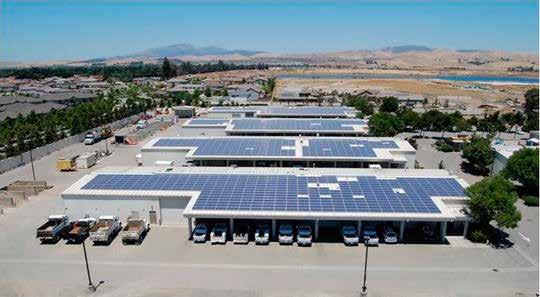 Since 2009, the City of Pleasanton has installed  24 kilowatts of solar photovoltaic systems on four municipal buildings, generating 614,800 kilowatt hours of electricity each year.

The largest system is on the Pleasanton Operations Service  Center. The 360-kilowatt system consists of 1,568 solar panels spread across four buildings. This installation saves the city approximately $144,000 each year with a payback period estimated at just over seven years.

To encourage its community to embrace solar energy, the City of Pleasanton offered residents and businesses who installed solar photovoltaic systems a $1,000 rebate.

As part of the program, the city worked with local solar providers to establish additional incentives for local participants. Nearly 200 residents have taken advantage of the program.

In the first year of the program, residents installed nearly one megawatt of solar power, bringing total community installations to 5.87 megawatts (2.7 megawatts of residential, 3.17 megawatts of commercial/industrial) over the last five years.