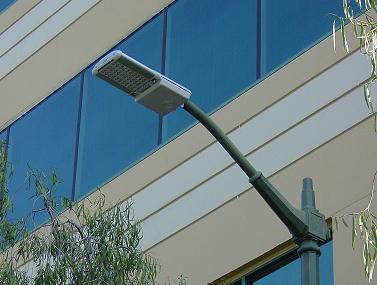 The City of Palo Alto’s 2007 Climate Protection Plan provided the impetus for the City to launch its light emitting diode (LED) streetlight demonstration program. Given that LED streetlights can be 40-50% more efficient than high pressure sodium (HPS) streetlights currently in use, they hold the potential to reduce operating costs and achieve significant greenhouse gas reductions. As LED streetlights are a new technology (not to be confused with LED traffic signals) and new products are coming out on a regular basis, it was important for the City to first test various models of streetlights before committing to a larger scale transition to LED.

The City contacted the Department of Energy’s Pacific Northwest National Laboratory (PNNL) and was selected to participate in the DOE’s Gateway Solid State Lighting demonstration program. As a participant in the program Palo Alto received free assistance from PNNL on selecting LED streetlight fixtures to test, collecting illuminance data from the baseline HPS fixtures and the test LED and induction fixtures, as well as overall analysis on the light output and economics of the test fixtures.

As part of the demonstration program the City installed seven LED and three induction lighting fixtures on two residential streets, and two LED and two induction light systems near City Hall that were equipped with remote monitoring and dimming systems. These fixtures and monitoring systems were then evaluated on their lighting and energy performance, and economics, as compared to the current HPS street lights.

Based on the demonstration program the LED fixtures proved to be the most promising technology, reducing energy use 44% below the HPS streetlights. The economics of LED streetlights, however, can still be a challenge. Palo Alto operates its own electric municipal utility and therefore uses the avoided cost of electricity (approximately 8 cents/kWh) rather than a retail electricity rate to determine the cost effectiveness of LED streetlights. Despite the significant energy savings, LED fixtures are only marginally cost effective due to the high cost of LED fixtures ($350-$1000 depending on wattage, the vendor, and the bulk purchase agreement)

The City is currently moving forward with replacing 10% of its streetlights with LED technology by early 2011 using stimulus funds, and further plans on replacing all remaining streetlights with LED fixtures by the end of 2015. In making the decision to invest in LED streetlights, the City factors in the benefits of LED beyond reduced energy use, including GHG reductions, lower maintenance costs, longer lifespan, and the fact that LEDs do not contain any mercury (unlike HPS). Furthermore, the cost of LED streetlights is expected to come down over the next five years as more products become available and production volume increases.