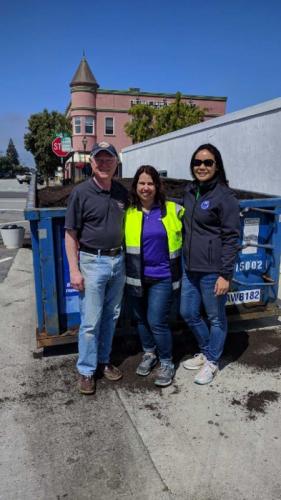 The City of Half Moon Bay, a Beacon participant since 2017, is committed to pursuing and implementing sustainable practices to reduce its carbon footprint. With a population of approximately 13,000 and an area of just 6.44 square miles, Half Moon Bay is a small city with big sustainability ambitions. The city strives to provide more sustainable infrastructure for the community. It has installed public electric vehicle charging stations, converted more than 200 streetlights to LED and constructed a zero-net energy library, the first of its kind in San Mateo County. In 2019, Half Moon Bay adopted the Sustainability Implementation Plan (SIP), which was designed to establish the city as a community leader in sustainability by adopting policies and ordinances that reflect the city’s commitment to promoting zero waste and encouraging sustainable choices in the home, at work, at school and throughout the community.

Zero waste rose to the top of the city’s sustainability priorities because of the mounting challenges associated with managing solid waste in San Mateo County. The international market for recyclables has declined and standards for reduced contamination have increased. For that reason, recycling programs in the county have found it difficult to meet the new standards and maintain sufficient revenue. The dwindling capacity at the Ox Mountain landfill near Half Moon Bay compounded these challenges. Half Moon Bay was faced with the prospect of having to landfill many contaminated recyclables, waiting out the lengthy process of expanding landfill capacity and meeting the upcoming statewide goal under SB 1383 to reduce organic waste that is landfilled by 75 percent by 2025. So the city developed a strategy to reduce materials sent to the landfill by prioritizing composting of organic waste for all residential and commercial accounts.

One of the key actions the city took to advance the zero waste goals of the SIP was to incorporate organics recycling into residential and commercial waste collection services. Those actions prepared the city to compost organic waste well ahead of the targets set out by SB 1383. Since the city contracts out for waste collection services, successfully implementing waste diversion programs through a franchise agreement with a waste hauler was critical. In 2018, Half Moon Bay entered into an agreement with Republic Services to provide solid waste services to all residents and businesses, which includes garbage, organics and recycling.

The early success of the new Franchise Agreement was due, in part, to the city’s proactive approach to educating and engaging the public and elected officials around the necessity for raising rates in order to pay for state-mandated services. As part of the procurement process for the new Franchise Agreement, the city held a Town Hall meeting to engage with elected officials and community members about the various State requirements, including SB 1383, that would soon impact services and rates. Staff also detailed the importance of and process for procuring a new solid waste Franchise Agreement to help achieve the targets.

Once Republic Services was selected as the preferred contractor, city staff met with the City Council Finance Subcommittee to provide details on how the new contracted services would meet the legislative requirements. This meeting equipped the city’s elected officials with the information they needed to effectively engage with their constituents about the upcoming rate increases. Republic Services also prioritized community engagement by  conducting customer education at town hall meetings prior to and immediately following the rollout of the new customer programs.

The final Franchise Agreement presented to city council in September 2017 received no public protests related to the change in services and rates. As a result, the new Franchise Agreement carried with a 4/1 council vote. The city believes that successful outcome was due in large part due to frequent and targeted council and community engagement.

Even though customer rates increased across all service levels, customers also received increased services, including new organics collection (also known as compost). Residential customers who previously subscribed to the 96-gallon garbage cart actually experienced a decrease in their rates, because that container size was eliminated, and they were shifted to a less expensive, smaller container.

The city believes that the key to the success of their new programs and meeting their diversion and sustainability goals is customer knowledge, buy-in and participation. The new Agreement required Republic to collaborate with the city to develop and implement a comprehensive public education and outreach plan for the start-up of the new services and through the term of the agreement. The city now also receives Administrative Support Payments to oversee the new Franchise Agreement and to provide support to Republic’s Recycling Specialist, who promotes the City’s recycling programs through commercial waste audits and community outreach events.

Thanks to their innovative partnership with Republic Services, Half Moon Bay is on target for implementation of most components of SB 1383 by the mandated 2022 deadline, as well as on their way to reaching the city’s zero waste goals.

Through the new Franchise Agreement with Republic, the city has established an aggressive schedule and targets for its diversion requirements.

Republic is required to divert a minimum of forty percent of all materials collected from all services under the provisions of the franchise agreement during calendar year 2019; 45% for 2020; 50% for 2021; and 55% for 2023 and beyond.

Half Moon Bay by the Numbers

Franchise Agreement: 10-year with a 5-year extension, at City’s option