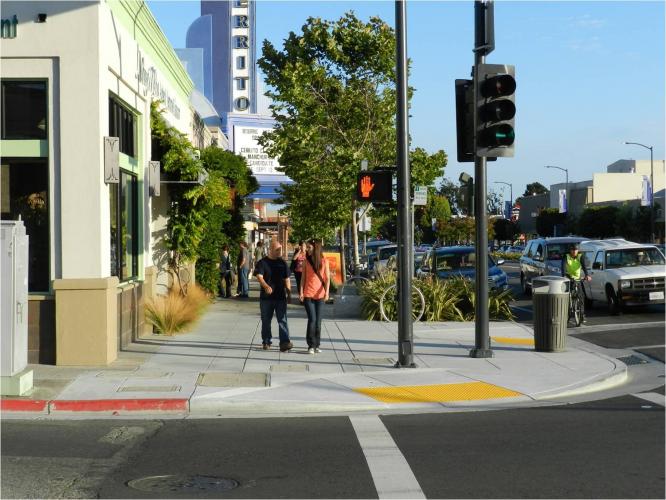 The City of El Cerrito in the East Bay of San Francisco is redesigning the main street of their city into a bicycle, pedestrian and environmentally friendly streetscape.San Pablo Avenue is the center of El Cerrito’s economic and cultural life; however it is also a state highway that runs through nine  East Bay cities, including San Pablo, Oakland and Richmond.  El Cerrito has been working since 2007 to preserve the character and promote economic development of San Pablo Avenue while also creating a safer and more sustainable environment. As a state highway, any changes to the street design and operation require the approval of Caltrans.  Fortunately, Caltrans takes a “Complete Streets” approach to transportation and was open to new ideas. Working in collaboration with Caltrans and other regional and local agencies, El Cerrito, successfully established an innovative and unique community space while saving water and energy and promoting active transportation. They are recognized as national leaders for their redesign of San Pablo Avenue and for their dedication to health and sustainability. 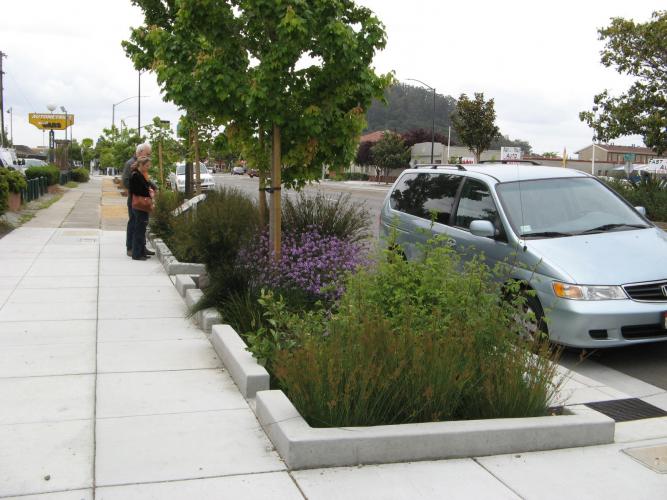 San Pablo Avenue is the heart of El Cerrito, functioning as their Main Street. However, it is also a state highway shared with other East Bay cities, causing irregularities and lack of cohesion in planning and design. In 2009, El Cerrito and the City of Richmond cooperatively released draft of a Specific Plan for San Pablo Avenue (not yet adopted) in order to enhance economic development opportunities and improve design features.

The Specific Plan builds on work that El Cerrito has done in cooperation with CalTrans since 2007. The San Pablo Avenue Streetscape Improvement Project’s goals are  “to create a distinctive sense of place, improve the walking environment, enhance transit stops, provide better landscaping, and increase pedestrian safety and accessibility.”

Some of the design features that have been added to San Pablo Avenue since 2007 are: 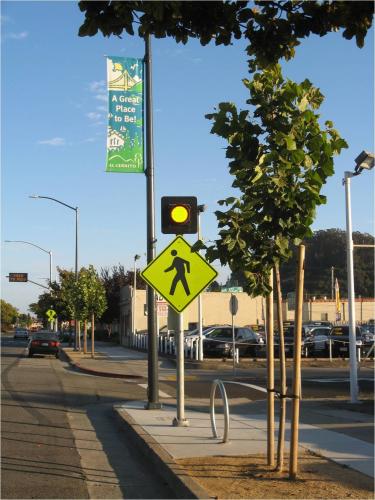 El Cerrito also integrated features to spotlight the neighborhood’s culture and identify and establish El Cerrito as a distinct place along the Avenue.  These features include the  installation of wayfinding banners and signage, public art and historic markers in the sidewalk. Additionally, in 2006 they renovated and rehabilitated the Cerrito Theater, also on San Pablo Avenue, which is a historic landmark that had fallen into disrepair.  The City even hosted a celebratory Spring Fling street party, to celebrate the work and changes to the streetscape.

This street improvement project is being implemented in phases, in part to keep the momentum going, and in part due to funding and permitting issues.  The first phase included wayfinding signage and banners (2006) and continued with completion of the median landscape renovation (2007-08).  The major streetscape enhancements were completed in October 2011.   Through a local “1% for Art” program. public art is being installed this year.

The project funding came from a variety of sources:

The San Pablo Avenue project is one component of El Cerrito’s larger sustainability commitment. In 2008, the city erected a new, LEED certified City Hall implementing water conservation initiatives including high efficiency toilets, waterless urinals, faucet aerators. Additionally, they planted 14,000 square feet of low-water, Bay Friendly landscaping and installed an irrigation-only meter and an in-line drip irrigation system to maintain the grounds. Between 2001 and 2008, they were able to decrease their overall municipal water use from 26,120,000 gallons to 18,684,000 gallons – a savings of 29%.

Additionally, El Cerrito is participating in the Institute of Local Government’s Becaon Award Program, a statewide program recognizing cities and counties that are “working to reduce greenhouse gas emissions, save energy and adopt policies and programs that promote sustainability”. El Cerrito also shows their commitment towards health and sustainability as a member of ICLEI Local Governments for Sustainability, Healthy Eating Active Living (HEAL) Cities campaign and as a U.S. Conference of Mayors Climate Protection Agreement signatory.  Crafting policies and design for community health, sustainability and livability has reinvigorated El Cerrito’s economic core and is spreading throughout the region as they work with Richmond to continue planning for a better San Pablo Avenue.

Back
This item appears in:
Case Story December 18, 2012 City of El Cerrito