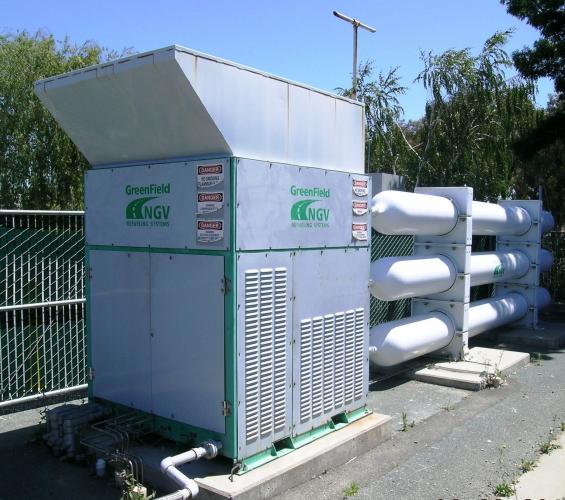 The City of Culver City began converting its fleet from primarily diesel and gasoline to compressed natural gas (CNG) in 1998. In 2010, the city’s fleet includes 605 on-road and 15 off-road vehicles used by all city departments. A newly remodeled and expanded CNG fueling station supports the CNG vehicles. Federal grants and regional air quality funding sources provide funding for vehicle purchases and construction of the fueling facilities.

In 1998, the City of Culver City began the conversion of its fleet vehicles from gasoline and diesel to compressed natural gas (CNG). CNG is the city’s fleet fuel of choice because the fuel was determined to be readily available, is cost effective, produces lower emissions, and reduces dependence on foreign oil.

The city currently has 605 on-road and 15 off-road CNG-fueled vehicles including refuse and public works trucks, transit buses, standard autos and other fleet vehicles. In 2004, Culver CityBus became the second 100 percent CNG-fueled transit system in the state. Approximately 80 percent of the city’s refuse fleet is CNG-powered; 20 percent runs on diesel fuel. Eighty percent of the city’s heavy-duty fleet operates on CNG fuel. All city departments use CNG vehicles, except for some police and fire vehicles used for mutual aide response in areas where CNG fuel stations are not available.

To support the conversion to CNG vehicles, the city expanded the administrative oversight of the fleet, including developing self-managed work teams to ensure the sustainability of the equipment. The city fleet division operates as a full-service fleet support service that provides equipment maintenance, repair, welding, and asset replacement. It also monitors and analyzes accidents and incidents involving city CNG vehicles.

The city owns and operates its own CNG fueling station to support the city fleet. Although CNG fueling stations are expensive, depending on the size and capacity required, the city takes advantage of grant funding and federal financial incentives that lower CNG fuel costs to make the system economical.

Funding for the vehicles and construction of the CNG fueling station was provided largely by regional and federal grants. In addition, the city saves about $1.2 million annually by using CNG instead of over 850,000 gallons of diesel fuel. Air quality benefits are significant.

The city received national recognition as the number one Government Green Fleet in North America in 2009, in part for its use of compressed natural gas.