The economic downturn and state take-aways have forced local officials in many cities to cut staff and programs in order to balance their budgets. Even cities with a relatively well-off population are facing difficult choices due to falling revenues. In the eastern San Francisco bay area city of Walnut Creek, as in many other cities around the state, local officials faced the unpleasant task of cutting programs in 2009 due to budget shortfalls, and the more unpleasant task of explaining this to the public. Building on an ongoing tradition of collaboration with residents and community building programs, city staff and officials worked with consultants and adopted a multi-stage public engagement Fiscal Health and Wellness prioritization process to educate and gather informed input from hundreds of residents. Information gathered in this process, dubbed “Community Conversation on Balancing for the Future,” will help city officials create a budget that reflects the values and priorities of the community. 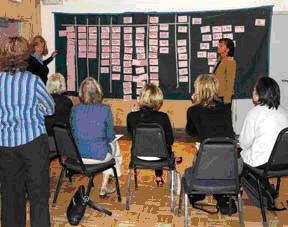 City leaders in Walnut Creek realized in 2009 that they were facing a $20 million budget shortfall for the next two years, directly related to the economic downturn and state take-aways of local funds. They inevitably would have to cut programs in order to balance the budget.

With a longstanding tradition of community building and engagement, local officials knew that they needed to reach out to residents and ask them to be partners in addressing the budget problem. With over 400 local graduates of the city’s citizen institute program and over 1000 people trained by the City in emergency preparedness, community relations manager Gayle Vassar has a sizeable email list of residents who are active in their community and could quickly use the list to tap into the ongoing working partnership between residents and city staff and officials.

In the spring of 2009, city staff and officials organized three ninety minute meetings with community partners including representatives of local community organizations, schools, graduates of the City’s Citizen Institute program and emergency preparedness (CERT) training program, and other interested residents. Over 100 active residents participated in these discussions designed to educate people about the City’s financial situation, and about upcoming Community Conversations to engage a broad cross section of the community in defining and prioritizing goals to inform critical budget decisions.

A series of five Community Conversations were held during the fall of 2009. These three hour meetings were held at different times, days, and locations around the city in order to encourage diverse participation and make it possible for everyone interested to participate. City staff worked with consultants from ICMA to merge the city’s community conversation process with a fiscal health and wellness prioritization process endorsed by the ICMA that has been used in many other cities, including San Jose.

The five community meetings consisted of a thirty minute educational presentation on the budget and city finances by city staff, followed by questions. Then participants were broken into small groups of about 12 people and took part in a facilitated dialogue and a “green screen” prioritization process. In this process, participants were asked to define priority goals set by the City Council, and the definitions were then grouped on a green screen to facilitate finding common themes and defining sub-goals that are most important to residents.

Residents were asked to continue participating in the budget prioritization process through a virtual bank account exercise in December of 2009. About 170 residents participated in this exercise at city hall, where they had the opportunity to discuss options and city programs with city staff as they decided how to allocate a virtual $500 among the goals. The goal category of “Culture, Recreation and Learning Opportunities” received 24 percent of the virtual dollars, followed by “A Safe Community” with 21 percent.

“We wanted residents to know that this was an opportunity to step up and make a difference,” says Communications and Outreach Manager Gayle Vassar. Results of the process were used by city staff, along with input from internal staff dialogues, to rank each city program on its effectiveness in achieving each of the six priority goals established by the city council and defined by the community. The final budget proposal is scheduled to be presented to the city council for approval on May 4, 2010.