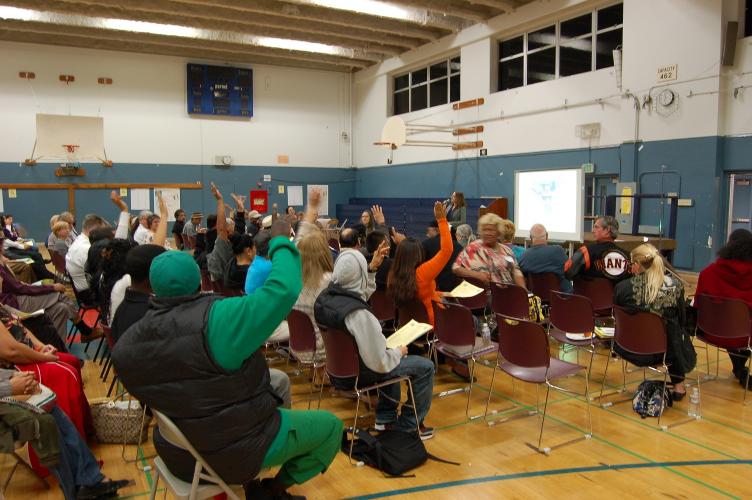 The City of Vallejo launched their third cycle of Participatory Budgeting (PB) in 2015, a process that gives residents and stakeholders the opportunity to develop and prioritize community-generated ideas for a portion of the city budget for city council consideration.

The City of Vallejo emerged from bankruptcy in 2011 and became the first U.S. municipality to undertake a participatory budgeting model city-wide. On November 8, 2011 voters approved Measure B, a ten-year one-percent sales tax to generate funds to enhance quality of life for Vallejo’s residents, buisnesses and stakeholders. The city generated $11,875,000 in Measure B revenues as part of the FY 2012/13 budget process.

In 2012, the city council adopted a resolution establishing a participatory budgeting process in Vallejo and allocated $3.2 million (30 percent) of Measure B to fund the program. The city contracted with the non-profit Participatory Budgeting Project to help design Vallejo’s initial participatory budgeting process and to help coordinate these efforts with staff of the city manager’s office. In the tale end of 2013, the city manager’s office hired three administrative analysts to support the process.

The city initiated and completed two successful participatory budgeting efforts to date. In cycle 1, budget assemblies in October 2012 were followed by a public votes from May 11-18 2013. During the vote, 3,917 residents selected 12 projects totaling $3,282,100:

The City of Vallejo’s PB process is governed by four overarching goals: To: 1) improve the city; 2) engage the community; 3) transform democracy; and 4) open up government.

Vallejo’s second cycle began in February 2014. In October 3, 2014, 744 residents selected projects ranging from education and arts to economic development and youth. The city partnered with the Stanford Crowdsourced Democracy Team to provide a convenient and secure digital voting platform, as an alternative to traditional paper ballots. Nearly a quarter of the second cycle ballots cast were digital.  The eight projects that received the most votes included, with budgets totaling $2,442,553 included:

In November 2014, the city council approved and allocated funding for those eight projects.