The City of Hayward – Adapting to Sea Level Rise 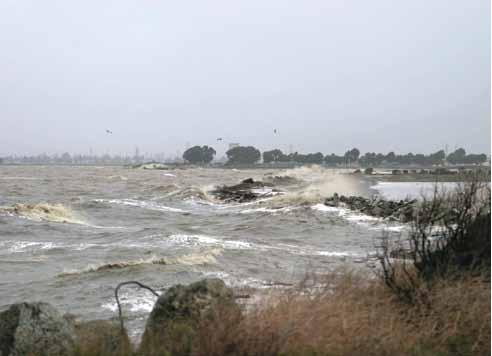 When the Bay Conservation and Development Commission (BCDC) released a set of maps depicting areas of the San Francisco Bay shoreline vulnerable to sea level rise, the City of Hayward and the Hayward Area Shoreline Planning Agency (HASPA) took notice. HASPA, which consists of the City, the Hayward Area Park and Recreation District, and the East Bay Regional Park District, commissioned a preliminary study to evaluate vulnerable infrastructure, and assess the feasibility of protecting shoreline infrastructure and wetlands along the shoreline.

The “Preliminary Study of the Effect of Sea Level Rise on the Resources of the Hayward Shoreline”, released in March 2010, came about at the urging of Hayward City Councilmember Bill Quirk who also sits on the Board of HASPA. The report itself is the beginning of HASPA’s adaptation efforts. The City’s Climate Action Plan (CAP), which was released before the shoreline study, also calls for the development of an adaptation strategy. Recommendations from the completed shoreline study will be incorporated into future versions of the CAP.

In order to conduct the preliminary study, the three agencies that make up HASPA each contributed $10,000 to hire a consulting firm to complete the work. The area of shoreline looked at in the study covers 4.3 miles extending from north of Hwy 92 to San Leandro, which primarily consists of tidal marshland mixed with various manmade infrastructure. In addition to residential and commercial properties, the study area is also home to recreational trails, wastewater treatment facilities, railroads, landfills, high pressure gas lines and other services that could be disrupted by sea level rise.

The study provides a preliminary assessment of the area’s vulnerability to predicted sea level rise of 16 inches by 2050 and 55 inches by 2100. Sea level rise projections were based on data and maps from the BCDC. The study also includes a detailed appendix comparing various SLR projections and their appropriate interpretations.

In addition to the vulnerability assessment, the report presents an overview of various approaches for mitigating the expected rise in sea level. Options range from actual armored defense of the shoreline to re-establishing natural systems to allow the marshland to adapt on its own. For example, freshwater from the wastewater treatment system that is currently being piped out into the bay could be re-directed to the marshes, creating brackish water that would allow for faster growth of tidal plants and potentially greater natural resilience.

The likely course will probably be a mix of approaches that will allow portions of the shoreline to adapt naturally. In addition, while the Hayward study provides insight on how various approaches will work to address future sea level rise, these approaches are relatively new and may conflict with commonly accepted best practices and regulations. Moving forward will require extensive discussion and cooperation among the many stakeholders.

The City of Hayward and HASPA’s immediate next steps include continuing to publicize the results of the current study and bringing on additional partners. To that end, HASPA has been presenting the results of their study at various venues and is circulating a resolution of cooperation to mitigate sea level rise to potential new stakeholders.

Back
This item appears in:
This case story has been archived and may contain content that is out of date.
Case Story September 28, 2010