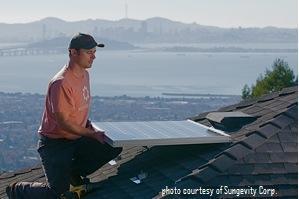 Community Story written and posted by BAAQMD, May 2010

Property assessed clean energy (PACE) programs allow property owners to finance energy efficiency and renewable energy projects on their home or business and pay the project cost back as a line item on their property tax bill over up to a 20-year period. This innovative financing mechanism was first piloted by the City of Berkeley in 2008–2009. Berkeley’s pilot program, called Berkeley FIRST (Financing Initiative for Renewable Solar Technology), provided financing for solar photovoltaic (PV) installations and is serving as a national model. Seventeen states and more than 200 cities are now preparing to launch Berkeley-like PACE programs. In California, a statewide PACE program called California FIRST is to be launched in the summer 2010. California FIRST will include financing for not only solar PV, but also solar thermal and energy and water efficiency improvements.

The Berkeley FIRST model will benefit from being brought to scale, thereby allowing more property owners to participate and helping to reduce interest rates and administrative costs. In order to expand the program, the City of Berkeley is partnering with Alameda County as part of a statewide CaliforniaFIRST program scheduled to launch in the summer 2010.

Berkeley FIRST was developed and launched as a component of the Berkeley Climate Action Plan. In removing barriers to solar as well as energy and water efficiency improvements, the program serves as a tool for reducing greenhouse gas (GHG) emissions. Berkeley FIRST was implemented by the Office of Energy and Sustainable Development, a division of the Berkeley Planning Department.

The Berkeley program was launched in September 2008 and all solar installations were completed within the next year. In total, the program helped finance 13 new solar installations distributed throughout Berkeley. In addition, 85% of the enrollees that withdrew from the program, and a number of applicants that were waitlisted, reported installing, or having plans to install, solar systems as a result of their exposure to the program. An initial program evaluation revealed that most participants cited environmental concerns as their main motivation for going solar, while high interest rates was the foremost reason offered by those who considered using Berkeley FIRST financing but ultimately decided against it. A final program evaluation will be available in the summer 2010.

The City Council allocated $1.5 million in bond funding for the pilot project to finance up to 40 solar PV installations. The City of Berkeley paid for the capital costs of the individual solar installations through proceeds derived from the sale of the Berkeley FIRST bonds. The bonds are then repaid from an incremental tax charged on the participating property owners’ tax bills over 20 years.

Because of the benefits of Berkeley FIRST and the fact that participation is voluntary, community members were very supportive of the program. Local solar installers were also supportive and helped publicize the program to their customer base. A mere nine minutes after the on-line program application opened, 40 applications had been received.

Renewable Funding LLC served as the third party administrator and the financier for the Berkeley FIRST program. Renewable Funding oversaw the application process and purchased the Berkeley FIRST bonds as they were issued. The costs for the City of Berkeley to administer the program included one full-time staff person to manage the program and on-going additional support from part-time staff as well as $80,000 in consulting fees for attorney, financial advisors and outside evaluators. These costs were covered by grants from the Bay Area Air Quality Management District and the U.S. Environmental Protection Agency.

The City is tracking and reporting the number and benefits of local solar installations on its Climate Action Plan website.