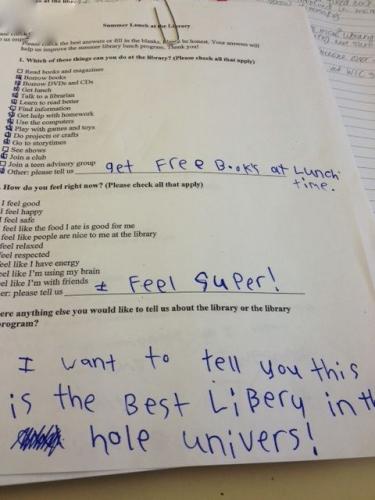 This past summer, the California Summer Meal Coalition partnered with the California Library Association along with summer meal providers and libraries in Sacramento, Fresno, Los Angeles, and San Diego County to jointly combat summer learning loss and the summer nutrition gap through a thoughtful approach to libraries as summer meal sites. While summer meals may not fit one’s traditional perception of the library, libraries involved with the project saw this as a natural extension of the work that libraries already do. And in case you aren’t aware of the many ways in which your local library is serving families, we’d encourage you to find out!

Collectively, participating library branches served 13,348 lunches and 432 snacks. Highlights from the project include:

The success of the project (which, by the way, was inspired by the leadership  of the City of Oakland, Alameda County Community Food Bank and the Oakland Public Library and with the generous support of the David and Lucile Packard Foundation) is an encouraging sign as we look for new ways to increase participation in summer meal programs and support the needs of low-income families. The California Summer Meal Coalition and the California Library Association are producing a guide to help other libraries and summer meal providers develop successful summer partnerships on the experiences of our Lunch @ the Library partners. Stay tuned!